Goodbye to Mitzi Shore, The Godmother of Comedy 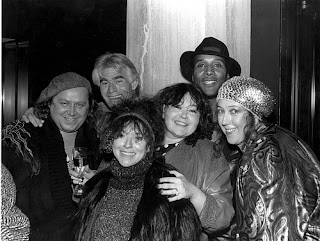 The comedy world mourns the loss of Mitzi Shore, mother of Pauly Shore, godmother of comedy


For those of us comics whose careers started at The Comedy Store, the Sunset Strip was dark on April 11th, when the owner, Mitzi Shore died. She contributed profoundly to many lives, including mine. She was a champion for us funny women, giving us the chance to find our authentic comedy voice, to perform in front of an audience, and to showcase our talent for bookers.

Founded in 1972, The Comedy Store originally looked like an Italian restaurant with checkered, red tablecloths. Mitzi’s son, Pauly Shore was a little kid running around; Steve Landesberg and Michael Keaton were regulars, working out their voices like the rest of us. Yakov Smirnoff washed dishes.

This was before everyone and their gynecologist was a stand-up comic, so I got to perform there pretty much every night and develop my act.

Two years later, when Mitzi divorced her husband, Sammy Shore, she took over full ownership of the club and began her legacy as a comedy icon. She painted the entire showroom room black and put red candles everywhere, apparently she believed comedy worked better if the audience felt they were in hell. The comic was the focus: lit by spotlight, the audience could see nothing else.

Petite, with curly locks covering her face, Mitzi was a dark goddess. She held court in the kitchen's darkest corner known as the “Mitzi Booth” or in the show room. I'm not sure I ever saw her in daylight, or if I had, I probably wouldn't have recognized her.

She could make or break a career so we were all psyched to have her hear our material. New comics eyed her booth, not wanting to go on until they had a shot at her attention. She did the thing that so many comedy pros do: they don’t laugh. The best you could get was a nasal, "That's funny."

Because she scheduled the performers, Mitzi wielded an enormous amount of power, the Queen Mother of stand-up, each of us were trying to kiss the proverbial comedy ring, hoping she'd propel us from wannabee to stardom. The 9 PM spot was prime: by 1:30, you were playing to a room populated exclusively by the hammered, the homeless and the heartless.

We treasured her words, elevating them to comedy scripture. In the nasal tone we all learned to emulate, she once said to me, "You are so kooky, Judy. Use that.”

I went home and pondered, "Is kooky good? Am I too weird? What?" But when Mitzi gave me a big break, in 1976 -- opening for Jackie Mason in the newly built, 450-seat Main Room, gone were the insecurities about how she thought of me.

There was no shortage of drama at the comedy club. Comics accused each other of stealing material. We behaved like siblings, competing, striking for pay, doing drugs and having sex in the parking lot. The saddest moment was the comic who, after not getting a spot, jumped to his death, and left a note that read, "My name is Steve Lubetkin. I used to work at the Comedy Store.”

Male comics dominated the stage with sexist, homophobic, and racial stereotyping jokes. In the 70’s the feminist and gay rights movements were just starting to make a cultural impact, as this was long before there was a #metoo campaign or “Will and Grace.” We were all fair game, bodies to pounce on. After all, this was the place that gave birth to Andrew Dice Clay.

But Mitzi created a safe space. She turned the upstairs storage room into The Belly Room-- a place for female comics. There were mixed feelings about it. I remember Marsha Warfield feeling it was a disgrace, saying, “Separate is not equal.” On a good night, there were eight people in the audience. But, many of us appreciated that Mitzi was recognizing the differences between female comedy and the hard-hitting punchline-oriented routines men were doing. (Listen to the story of the The Belly Room on NPR.)

Our room was even darker than the original room, with more red candles, making it womb-like and intimate. Since there was no danger of a Tonight Show booker venturing in, we could take chances. Sandra Bernhard worked on her sardonic rants; Lotus Weinstock brought her daughter Lili Hayden (now a successful rock violinist) onstage; Robin Tyler and Pat Harrison became the first lesbian feminist comedy act. I did a song about my clitoris (though I knew better than to use it at a gig in Utah).

Mitzi was one of the first to have an all-woman bill. A group of us that included Lotus, Sandra, Emily Levine, Diane Nichols and Lois Bromfield were taken by limo to the La Jolla Comedy Store, where we performed for sold-out houses.

Many of Mitzi’s comics went on to become stars, tour the comedy scene of the ‘80s, and branch off into writing and speaking. She touched so many lives, and we now mourn the loss of hers, the woman who helped everyone see that women could be funny and powerful.