Hearing Hugh Hefner dying, made me think back to my start in show business. 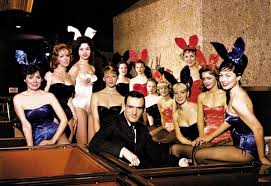 Before comedy clubs, the place to perform and get paid were Playboy clubs. When I was 21 years old, I was a magician and quitting my job as a teacher, OK, getting fired. So,  I needed to get professional jobs.  I looked up who booked the Playboy Clubs. I figured, it was the perfect place for me, I had talent and cleavage.

The man booking the Playboy clubs was Irvin Arthur. I called his office, “Hi I’m a girl magician and I would be perfect to work Playboy Clubs.”

The woman on the other end laughed and said, “Have your agent call. Mr. Arthur only sees talent who are represented.” 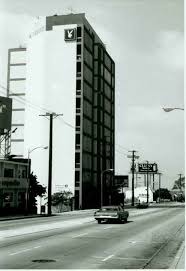 Since I didn’t have an agent, I drove to the 9000 Sunset Building that had the Playboy Marquee on top of it, and went into Mr. Arthur’s office. His receptionist told me in no uncertain words that I didn’t have an appointment and would not be seen.

“I’ll just wait here to see if he has a moment.”

I waited for 5 hours. Mr. Arthur would open his door and see me as various people went in and out. Finally, he motioned me in. Standing in front of his desk, I burned a dollar bill and made it reappear in a banana. He laughed. I put him across his desk and sawed him in half, and his receptionist applauded. That was when he invited me to perform that very night at the Century City Playboy Club. 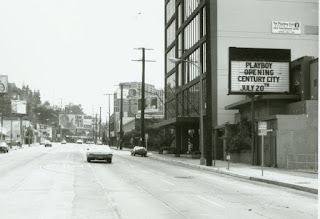 That night went great.  I went on to work at Playboy Clubs all across the country and Mr. Arthur became my manager.

It was at the Chicago Playboy club where I met “Hef” and my career changed forever.

My suitcases with my magic act didn’t show up. So, I tell the club manager the bad news, “Yeah, they didn’t arrive… so I can’t go on.” 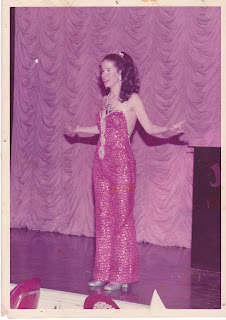 “Oh no,” he said sounding like an Italian mafia cliché. “So you think you can’t go on because you’re little tricks didn’t come? Really? That’s what you think? Listen sweetheart, the man himself, Hef” is going to be here and he don’t like changes, so do what you have to do. Curtain’s at eight.”

I sit down despondent in the bunny locker room and hear someone talking to me.
Hi! Are you new?

I turn and I’m looking at a woman in a bunny suit.

I just burst into tears. She pulls me to her and I cry into her massive bunny breasts.

Everything is wrong! I do a comedy magic act and my tricks didn’t show up. Hef is coming and I have nothing to wear, no act and you’re in a bunny outfit. 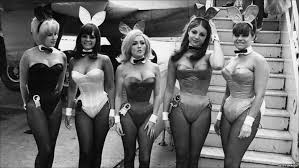 Judy, let me give you some advice, just say this to yourself, ‘I will survive, as long as I know I can love I know I’ll stay alive. You think I’ll tumble you think I’ll lay down and lie!’ Oh no I will survive.

Yes, I know… not original. But, that bunny changed my life.

I know Hef, Judy, and he wouldn’t be coming here to see your tricks. He’s coming to see you. Your tricks aren’t the funny part, you are. I can see that. Just be yourself. And you will survive. No, you will thrive.

I have nothing to wear.

I have an idea Bunny Chastity said.

Honey, you’ve got to shave?

Shave, I said looking under my arms?

You’ve got, you know, twisters.

Looking at my crotch I noticed the cut of the bunny suit exposed massive quantity of pubic hair.
“I can get you cleaned up in no time, “ says Bunny Chastity pulling out a razor from her locker.

The showroom is filling up. Hef is there.

I come out in the Bunny Outfit, scared as can be… I started to stutter as I said, “He- he- hello everyone… “

I feel them staring at my reddish upper thighs where Bunny Chastity just shaved… Someone shouts, “Hey Bunny!”

And then something snapped in me. Perhaps it was Bunny Chastidy’s motivational speech, or perhaps it was that the Equal Rights Amendment had just gone down to defeat in Illinois.

And said with confidence, “I’m a feminist and don’t call me Bunny! I’m a Rabbit damn you.”
And everyone laughs. And I will remember that moment for the rest of my life. I went on with the show.

Ladies and Gentleman, for the rest of my show I’m going to tell you what I was going to do for you if an airline, I won’t mention their name, but sounds like Belta. Big Laugh.

My escape from my grandmother’s girdle is on it’s way to Alaska. Big Laugh. I was going to do a sawing a man in half, with a black and decker saw, but Hef, you’ll be happy that my luggage is lost because I have a lot of feminist rage. Another Big Laugh.

And let me tell you about my Jewish mother and this cleavage. Another laugh.

Afterwards, Hef introduced me to his girlfriend, Barbie Benton and invited me to spend the night in the Chicago Playboy mansion. I stayed in the leather room which was actually vinyl. It’s all an illusion.

For the next three years I worked Playboy Clubs all across the country and did 22 performances on the Mike Douglas show.. The tricks got old and after a few months, I stopped bring them. I started going sans magic… That was when Playboy Clubs turned into Comedy Clubs and I was ready to ride the gravy train day of comedy, opening for Prince, Kenny Loggins, and of course, Barbie Benton.  And I now speak for a living and write books teaching others how to find their voice and their message.

I realized that magic isn’t tricking people that I’m turning a glass of sugar into a goldfish, but rather, real magic is turning problems into punch lines and speaking the truth. And that’s when you truly make magic.

Email ThisBlogThis!Share to TwitterShare to FacebookShare to Pinterest
Labels: Comedy Techniques, How to Become a Motivational Speaker, How to Break into Comedy, Hugh Hefner, Judy Carter, Marketing Tips for Comedians